In this funny, relatable talk, explore a language we all speak: the language of pictures. Illustrator Christoph Niemann shows us how, with a few simple lines, an artist can tap into our emotions and minds — all without words.

Meet Françoise Mouly, The New Yorker’s art director. For the past 24 years, she’s helped decide what appears on the magazine’s famous cover, from the black-on-black depiction of the Twin Towers the week after 9/11 to a recent, Russia-influenced riff on the magazine’s mascot, Eustace Tilley. In this visual retrospective, Mouly considers how a simple drawing can cut through the torrent of images that we see every day and elegantly capture the feeling (and the sensibility) of a moment in time.

The Great Wave off Kanagawa (神奈川沖浪裏 Kanagawa-oki nami ura, “Under a wave off Kanagawa”), also known as The Great Wave or simply The Wave, is a woodblock print by the Japanese ukiyo-e artist Hokusai. It was published sometime between 1829 and 1833[1] in the late Edo period as the first print in Hokusai’s series Thirty-six Views of Mount Fuji. It is Hokusai’s most famous work, and one of the most recognizable works of Japanese art in the world.

The image depicts an enormous wave threatening boats off the coast of the town of Kanagawa (the present-day city of Yokohama, Kanagawa Prefecture). While sometimes assumed to be a tsunami, the wave is more likely to be a large rogue wave.[2] As in many of the prints in the series, it depicts the area around Mount Fuji under particular conditions, and the mountain itself appears in the background.

Impressions of the print are in many Western collections, including the Metropolitan Museum of Art, the British Museum, the Art Institute of Chicago, the Los Angeles County Museum of Art, the National Gallery of Victoria in Melbourne,[3] and in Claude Monet’s home in Giverny, France, among many other collections. 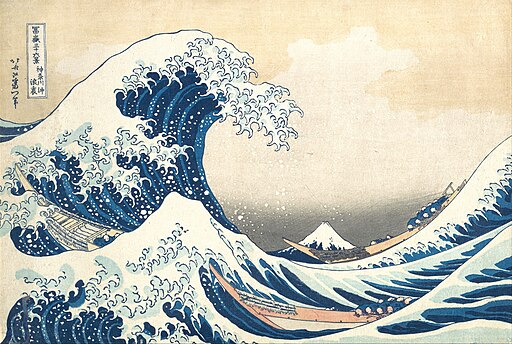 Simon Sinek – I stumbled across Sinek’s 40+ million viewed TED talk as a result of an Amazon Kindle ‘deal of the day’ suggestion, ‘Start With Why – How Great Leaders Inspire Everyone To Take Action’. Halfway through the talk I was convinced that this is a book I need in my life. Notice that I said I need the book in my life rather than this is a book I need to read. I have many books in my life that I seemingly have never given up time to read. That though is a story for another day. Sinek models his leadership thinking on a ‘golden circle’ three concentric rings. At its heart is Why, next out is How and finally What. Most start with What… If you haven’t viewed his talk it’s in the adjoining section. Enjoy!